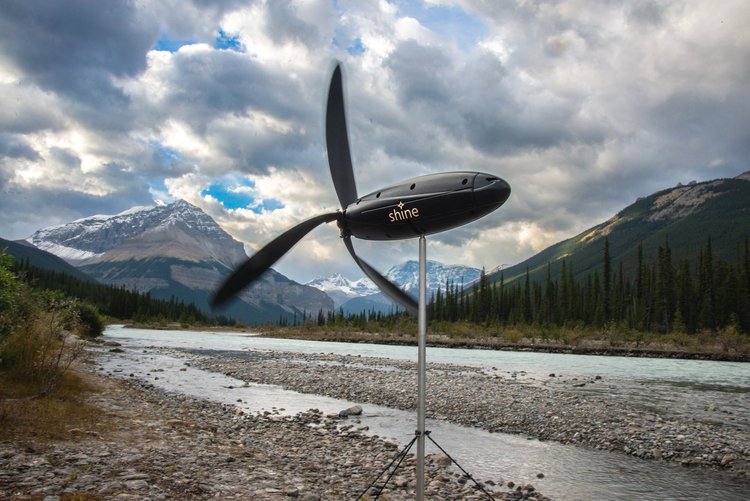 Firstly, Shine, weighs only 3 pounds, as the size of a water bottle. It can charge any USB device, or up to four phones.

Secondly, the turbine has a shape like a mini Zeppelin. It features three gently curved blades that fold out like flower petals and a collapsible tripod that is stored inside.

Thirdly, Shine raised over $270,000 so far. It will be shipping in a matter of months, just in time for camping season.

Managing wind always requires massive infrastructure, like windmills or wind turbines. Actually, engineers and designers are working to reinvent the technology by playing with scale and form.

In addition, the wind power turbine can be used during a blackout at home. It also serves to anyone who needs access to energy while not attached to the grid. Moreover, it will work for users that are campers, RVers, and nomads

People said, ‘We won’t carry it if it weighs more than three pounds.´ The battery makes up a third of the weight, and the turbine is made of polycarbonate reinforced plastic with a glass composite; the tripod is aluminum.

Shine has a portable nature and user-friendly design that are unique. To set it up, people stab the tripod into the ground and hold it down with tensioned cables.

We recommend: Energy and Resource Partnerships Strengthens Between Canada and United States

Then, people can unscrew the bottom cap of the wind turbine that holds the blades in place; unfold the blades, and fix the whole thing on top of the tripod.

As a result, the process takes fewer than 2 minutes. The tensioned cables mean that the tripod can be set up on uneven terrain.

Shine has the yawing mechanism. It allows the wind power turbine head to spin into the wind. The user don’t have to worry about which direction the wind is blowing.

The turbine works at wind speeds from 8 mph to 28 mph. That speed is enough to sway heavy branches and flip umbrellas.

Shine is meant to reflect not its function but rather its value and what it’s giving to the end user. It enables you to shine outdoors.

Finally, Shine’s lifespan is about five years, or roughly 1,000 battery cycles. Aurea explores the possibility of a removable battery that could simply be replaced at the end of its life.

Ozop Energy to strengthen business after the passing...