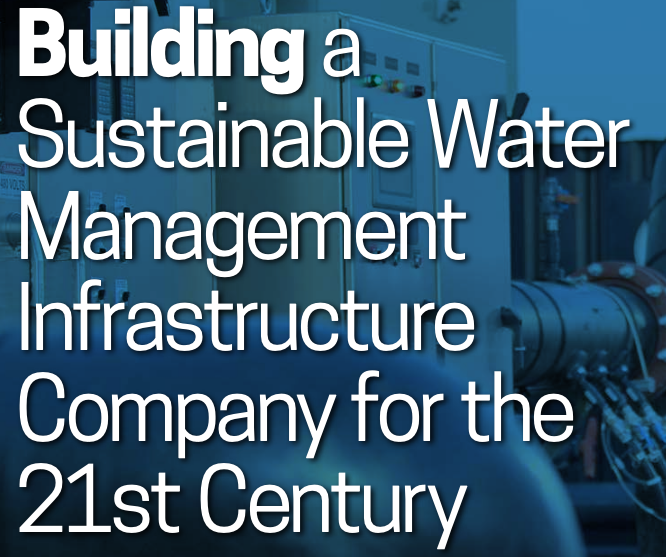 In our position as the leading full-cycle water management and produced water midstream company with advanced water recycling and sustainable water infrastructure, XRI operates over 350 miles of permanent pipelines, with an aggregated system capacity to transport approximately 1.75 million barrels per day. As a result, XRI is transforming the water midstream industry by focusing on the recycling of produced water. This, reducing industry reliance on potable water sources, and providing ESG-focused solutions for the benefit of all stakeholders.

Certainly, XRI is on pace to recycle and reuse approximately 250 million barrels of produced water annually throughout its extensive infrastructure footprint in the Midland and Delaware sub-basins of the Permian. By the fourth quarter of 2021, XRI’s recycling and reuse of produced water will expand from its current levels to approximately 800,000 barrels per day. XRI’s infrastructure asset and distribution infrastructure uniquely positions the company. In order to meet our customers’ growing demand for treated produced water for their operations and resource development. Each of our systems throughout the Midland and Delaware basins operate, as an industrial water utility. This enabling XRI to employ what we refer to as Water Exchange TerminalsTM.

By utilizing and building upon our distribution infrastructure XRI is positioned to:
1.Take produced water from multiple customers, treat and recycle that water and redeliver that water back into our pipeline supply systems
2. Subsequently transport additional produced water supply to our large-scale treatment systems, thereby providing increased efficiencies, both operationally and economically
3.Also, redistribute recycled produced water to multiple operator customers to provide sustainably sourced supply across our pipeline infrastructure footprint

Industry stakeholders benefit because produced water once viewed as a waste product now turns into treated, reusable water. This for multiple customers along our distribution systems and associated Water Exchange TerminalsTM. Even more importantly, the environment and surrounding communities benefit since the produced water utilized is principally ‘incremental water’ that is brought to the surface with the production of hydrocarbons.

Recommended for you: XRI Holdings Acquires Water Infrastructure in the Permian Basin

As more produced water is recycled and reused, fewer groundwater resources will be required going forward. In 2021 alone, XRI’s operations will protect more than 400 million barrels of freshwater aquifer depletion.

An integral part of XRI’s mission from its founding was and is to construct large diameter, buried water pipeline infrastructure providing the safety benefit to local communities of removing thousands of daily truckloads from the roadways with the dual advantage of minimizing traffic hazards and reducing CO2 emissions. This year XRI’s operations will result in the avoidance of 225,000 metric tons of CO2.

Founded in 2013, XRI became the first mover in the industry to create an independent water midstream company. And set a trajectory and standard for the industry in terms of resource conservation, safety and stewardship. This for the communities in which we work, live and serve. XRI positioned itself early on to work with the highest quality customers in the upstream energy sector due to its comprehensive commitment to environmental, health & safety and the company’s safety record and scores rank at the highest levels in all of industry.

One key measure of this is XRI’s Total Recordable Incident Rate (TRIR). Currently, XRI’s TRIR is 0.00, in an industry where a range considered acceptable is between 0.80-1.00. Earlier this year, XRI celebrated over one year without a recordable incident across each of the company’s divisions. We are continuing that impressive standard of excellence to ensure our operator customers the outstanding performance they have come to expect from XRI. As of August 31, 2021, XRI continues to be free of a recordable incident over the last 675+ days.

The team at XRI, across all disciplines of the company, is actively engaged with each of our operator customers, enabling them to meet their water sustainability initiatives. We take great pride in partnering with our clients in maximizing their use of treated produced water for completion activities throughout the Permian Basin. XRI’s exceptional growth trajectory results from many factors, not the least of which is the alignment of our ESG initiatives with those of our industry-leading customers. It is how we revolutionize the way we manage produced water. And underscores XRI’s position as the standard bearer in the water midstream sector. For example, by demonstrating our profound commitment to ESG leadership and community stewardship.

In conclusion, XRI is a portfolio company of Morgan Stanley Energy Partners. For more information about XRI, please visit xriwater.com and follow us on LinkedIn.

In addition to his role as President and Chief Sustainability Officer, John Durand represents XRI and the water management sector in several key leadership roles. John serves on the boards of the Energy ESG Council, the Texas Alliance of Energy Producers. And the Produced Water Society (in association with the Ground Water Protection Council).