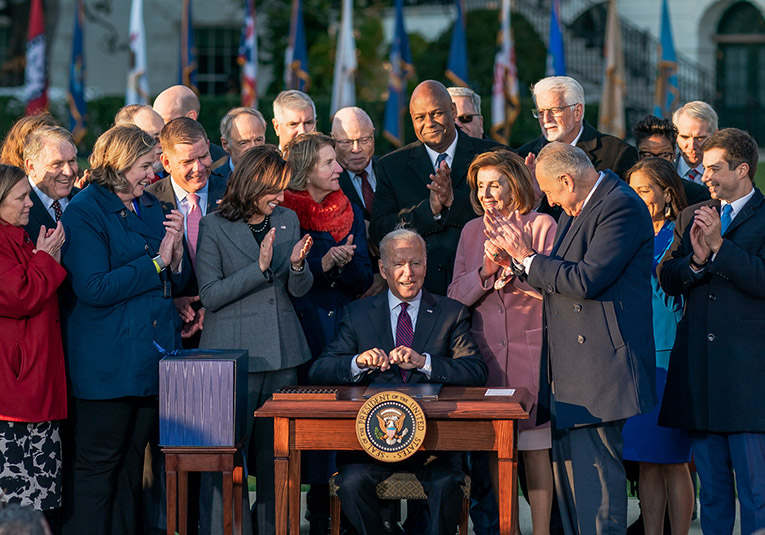 Joe Biden, president of the United States, signed the infamous bipartisan $1 trillion infrastructure bill this Monday and turned it into law. The deal is one of the biggest investment packages to pass in US history.

Firstly, the package intends to boost job creation by dispersing billions of dollars into local governments to fix aging infrastructure, boost the adoption of new energies, and expand technology like faster internet, etcetera.

Particularly for clean energy, as we have reported earlier, the package includes up to $73billion. It will be the largest single investment in clean energy and transmission in US history. It will upgrade power infrastructure for resilient transmission and the expansion of renewable energy projects.

Furthermore, the bill includes an investment of $7,5 billion to build out a national network of EV chargers. Mostly, this infrastructure will go to highway corridors to facilitate long-distance travel and within communities to provide convenient charging where people live, work, and shop.

Joe Biden and his admin focusin on delivering results

In addition, the bill also comes with a $2,5 billion investment to deliver thousands of electric school buses nationwide, including in rural communities. The investments in this particular sector will also help to push the demand for American-made batteries end ev’s; will support domestic manufacturing while also removing diesel buses.

Consequently, the bill’s signing was a celebratory moment for both parties, as hardly ever a package of this size had brought together both the Old Party and the Blue Party. About the matter, president Biden said. “Despite the cynics, Democrats and Republicans can come together and deliver results.”

He also added. “Too often in Washington, the reason we don’t get things done is that we insist on getting everything we want. With this law, we focused on getting things done.”