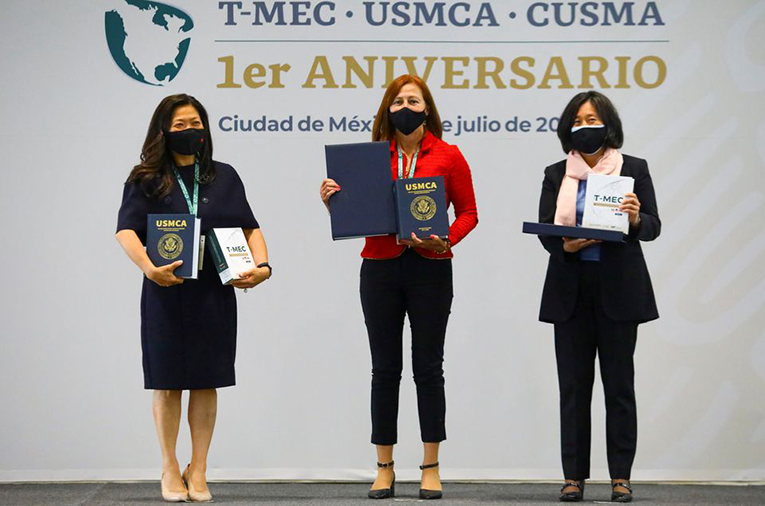 U.S. and Canada Trade Representatives expressed their concern over Mexico’s energy policies and investment environment; this, in the framework of the first anniversary of the USMCA. In their words, their countries are “closely watching” what’s happening in the neighboring country.

On Wednesday, trade ministers from the U.S. and Canada met in Mexico City with Mexican Economy Minister Tatiana Clouthier at the anniversary of the entry into force of the United States–Mexico–Canada Agreement (USMCA). Particularly at the event, U.S. Trade Representative (USTR) Katherine Tai and Canadian Trade Minister Mary Ng expressed concern about Mexico’s energy policies.

Concern in the U.S. about Mexico’s energy policies

Indeed, the minister answered a question about the Mexican government’s decision late last week to choose state-oil company Pemex; particularly, to run a significant shared oil discovery instead of a Talos Energy-led private consortium. Indeed, Talos Energy made the discovery in 2017.

Accordingly, Tai said; “Concerning Mexico’s energy policies that we see being discussed and envisioned by the Lopez Obrador administration; we are watching very closely. Indeed, we are raising our concerns, but we are here to engage,” Tai said, without citing specific issues, reported Reuters.

However, she welcomed the expected reopening of the San Rafael mine operated by Canadian miner Americas Gold and Silver Corp. In fact, the mine in northern Mexico will reopen following an extended labor dispute. Worth noting, it primarily produces silver, zinc, and lead.

As her counterparts expressed, Ng welcomed the historic, all-female makeup of the group. In fact, she dubbed them the “three amigas” or “three friends” in Spanish.

While the ministers’ visit in Mexico, they met with entrepreneurs from underrepresented groups. They also visited representatives from Mexico’s leading business groups and institutions involved in the country’s labor reform; USTR said in a statement.

In fact, “With this meeting, Mexico, the United States, and Canada reaffirmed their commitment to North American supply chains and economic competitiveness; which, indeed, have created significant economic growth and benefits for people and workers in all three countries,” Ng said.

Besides expressing her concern with respect to Mexico’s energy policies, Tai also met with Mexican Agriculture Minister Victor Villalobos. Then, she emphasized the importance of Mexico immediately resuming authorization of biotech products, like genetically modified grains.

Finally, the USTR chief also inquired about expanding access to U.S. fresh potatoes in Mexico. She similarly addressed the issues of illegal fishing in the Gulf of Mexico and sea turtle bycatch.

Entergy to build a natgas and hydrogen power...

US sanctions on Russia will come with a...