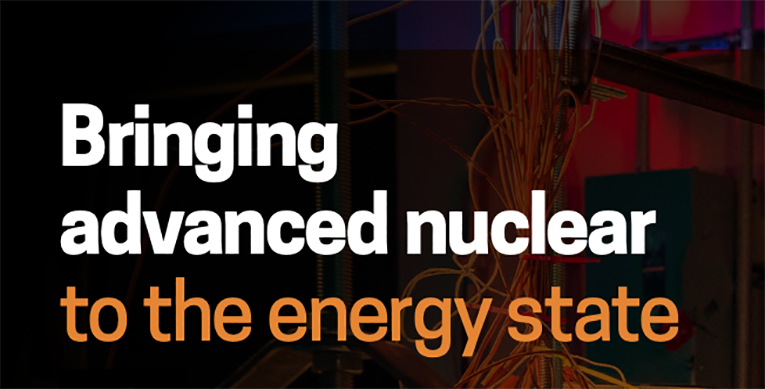 In the last two decades, hydraulic fracturing has revolutionized the oil and gas industry, not just in Texas but domestically and internationally. Indeed, that technological change brought energy independence to the U.S. Accordingly, new ways of doing things changed everything.

Today, advanced nuclear technology is shattering paradigms in a similar way; and Texas energy stands to benefit from another revolution.

Nuclear: the mainstay for energy

In 2004, I co-chaired the Energy Supply Committee for the Texas Energy Planning Council and spent a year holding hearings around the state on how to maximize energy production. One of our findings was that hydrocarbons would be the mainstay of energy for the foreseeable future. In fact, the renewables – wind and solar – could not carry that load alone; at the time, the only technology that existed to replace hydrocarbons was nuclear.

That was 2004, and the potential and importance of this technology has only increased since then. Accordingly, the energy of the future will be nuclear. Moreover, it will be renewable and reliable, low or zero-emission, and deployable where it’s needed.

Already, nuclear power is the safest and cleanest method to generate electricity on a commercial scale. Indeed, Its safety record is far superior to other electricity-producing methods, and advanced reactors – using molten salt as the coolant – are even safer.

Further, advanced nuclear power produces zero-carbon dioxide emissions and minimal waste. A molten salt reactor, for example, will only make a few percent of the total waste that current reactors produce, and that waste will be relatively short-lived.

The use of advanced molten salt nuclear reactors also significantly reduces the cost of power plants; thus, providing electricity at a lower actual cost than any current energy source, including coal, natural gas, solar, or wind.

Therefore, electricity output can be quickly adjusted to match demand, helping stabilize the grid in areas with a high volume of intermittent renewables. Also, advanced nuclear reactors will come in a wide range of sizes, allowing owners to tailor electricity generation to demand.

Beyond the advantages to Texas energy production, advanced nuclear molten salt reactors have the potential for lifesaving benefits through the desalination of water and medical isotopes.

Indeed, molten salt reactors operate at high temperatures and are an efficient heat source for the desalination of water. Therefore, given that one in three people worldwide suffers from a shortage of freshwater, this addresses a fundamental global need.

Molten salt reactors also naturally produce isotopes needed for treating cancer but are not found in nature. For instance, molybdenum-99 (Mo-99) and bismuth-213 (Bi-213) are two radiopharmaceuticals showing great promise for diagnosing and treating cancer. Particularly, mo-99 allows doctors to make diagnoses quickly without the need for an invasive procedure.

On the other hand, bi-213 provides a new treatment option that could spare patients from the pain caused by chemotherapy. Specifically, with the current unstable and limited worldwide supply of Mo-99, physicians are sometimes forced to choose which patient has a greater need for the procedures. Moreover, people around the world are searching for a reliable supply of Mo-99. Besides, currently, there is no source for Bi-213.

About the NEXT Research Alliance

Texas universities are already stepping up to explore the possibilities of advanced nuclear reactors, with funding from Natura Resources. Abilene Christian University, Georgia Institute of Technology, Texas A&M University, and The University of Texas at Austin. Thus, they are at the forefront of researching the potential of a molten salt reactor.

Particularly, ACU’s NEXT Lab is leading the four-university NEXT Research Alliance. Accordingly, the consortium launched in 2019 to design, license, and commission the first university-based molten salt research reactor, hosted and owned by ACU.

In 2020, Natura Resources entered into a $30.5 million sponsored research agreement with the four consortium universities; $21.5 million to Abilene Christian and $9 million to the other three universities. Natura also has a project management agreement with ACU that provides for the design, licensing, and construction of the reactor.

To that end, ACU’s NEXT Lab has secured its first patent and has a second patent in the provisional stage.

The ACU’s NEXT Lab

Accordingly, lab work on campus in Abilene continues with the construction of a second salt loop, the development of a salt purification system, the commissioning of the molten salt filter system. Also, the second-generation chemical analysis system, and a series of public meetings with the Nuclear Regulatory Commission; particularly, to prepare for submission of a reactor construction permit later this year.

Globally, we’re seeing the energy industry as a whole moving from natural gas to advanced nuclear. In fact, as Texans, we can be leading this next revolution or lagging behind. It’s time we get serious about researching, funding, and supporting the next generation of advanced nuclear energy.

Doug Robison is a third-generation oilman, partner, co-founder, president, and executive chair of ExL Petroleum, a Permian-based oil and gas exploration, and production company. He previously served nine years as general counsel and chief negotiator for Henry Petroleum LP and worked more than 14 years for Exxon Company U.S.A. In 2004 he served on the Texas Energy Planning Council and co-chaired the Energy Supply Committee. He is the founder and sole member of Natura Resources. He also serves on the strategic committee for Abilene Christian University’s Nuclear Energy eXperimental Testing Laboratory.

Following the Example on Compliance and Gender Perspective

Refiners ready for transition to renewable fuels after...