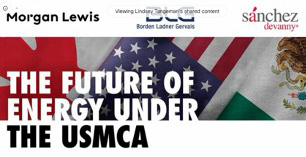 There could be possible violations to USMCA derived from the current Mexican position in connection with the energy industry according to energy experts.

That opens the possibility for investors in Canada and the United States to implement legal remedies.

Concerns over the Mexican Government’s current position in terms of private investment participation and protection are at the forefront.

“The future of Energy under the USMCA” webinar addressed this issue, along with other topics such as energy differences under NAFTA, and the Mexican 2013 energy reform.

Humberto Padilla from Morgan Lewis talked about increasing expectations in the US towards rhetoric correction from the Mexican Government.

Alan Ross from Borden Ladner Gervais, recognized there are several concerns in Canada regarding the current administration’s behavior compared with the 2013 Energy Reform optimistic environment.

José Alberto Campos from Sanchez Devanny, said the Mexican government should be cautious regard international obligations.

Campos also stated that recent advantages given to Petróleos Mexicanos (PEMEX) and the Federal Electricity Commission (CFE) go against the Mexican Energy Reform.

Despite what current Mexican President Andrés Manuel López Obrador says, the energy industry revitalized due to this legal framework of the USMCA and no actual privatization of the energy sector happened. He said reform permitted private entities to participate in some parts of the industry along with the new for-profit state companies (FPSC) on a more competitive frame.

María Luisa Mendoza from Sanchez Devanny analyzed how the current Mexican Administration’s position could lead to possible violations under this treaty. To address it, she recalled doubts related to the Agreement’s Chapter 8 on Recognition of Mexican Ownership of Hydrocarbons.

Despite industry uncertainties, Mendoza stated the chapter consists more on a reflection from the current administration than on a legally-binding reservation

Over the possibility to protect investments, speakers referred to the legal framework provided by Chapters 14 and 31 on Investment and Investor-State Dispute Settlement Provisions (ISDS).

Alan Ross also recalled the Canadian industry perspective towards the former North American Free Trade Agreement (NAFTA) and its Chapter 11 on ISDS. Although Canada resulted affected several times by this mechanism, Ross said it created a more certain and transparent environment for investors.

Participants concluded that even though the industry has several concerns, this regional agreement still provides useful tools for legal protection. They also recognized NAFTA’s importance to current treaty’s development and investor’s familiarity.

Geothermal projects in Japan to be developed by U.S. GreenFire Energy

GM names eTransEnergy as a preferred provider for...