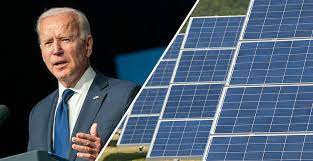 The President of the U.S.A. Joe Biden concluded that he will suspend solar panels tariffs from four Southeast Asian countries. These countries are Thailand, Cambodia, Vietnam, and Malaysia. In addition, the president invoked the “Defense Production Act” law, which dates back to the Cold War and with which he intends to move products from the private sector through the Pentagon. All this is to increase the production of solar panels within the United States.

The president and his fight against climate change.

With this pair of new measures taken, Biden establishes fundamental precedents to transform the energy sector in the country and thus face the climate crisis. Its projected goal for 2050 is to have solar energy produce 45% of the electricity in the United States.

After several complaints issued by the U.S. energy sector, the government adopted those measures. They revealed several problems in the supply chain caused by an investigation by the Department of Commerce.

The Department of Commerce, for its part, continues the investigation since there are supposedly Chinese companies trying to avoid paying tariffs. The evasion is happening by diverting part of its operations to Thailand, Cambodia, Vietnam, and Malaysia.

Biden will be benefiting those countries because the four together account for 80% of U.S. solar panel imports.

The North American president also promised the investment of 1.7 billion dollars in clean energies. It also aims to reduce greenhouse gas emissions to zero by 2050.

This is how he continues to improve the priority of the fight against climate change. He is compensating for steps taken by his predecessor.

At the moment, Biden has his hands tied on a large set of measures because they have been stalled in Congress. Hopefully, later such initiatives can become a reality.

For your capital project to succeed, you need...