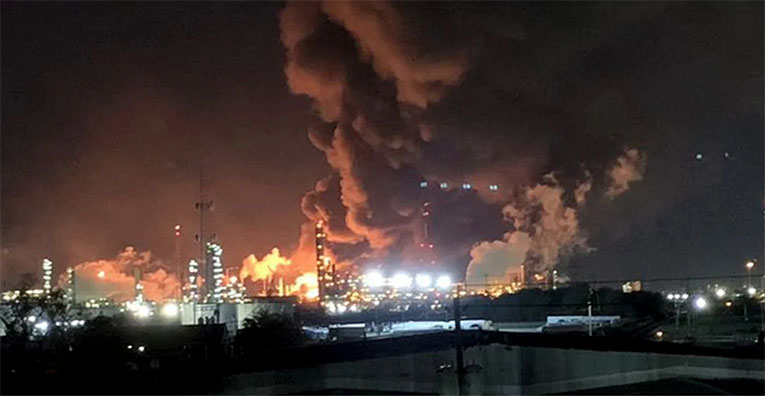 On Exxon’s refinery at Baytown, Texas, a fire erupted this Thursday leaving four people injured, according to a report from Reuters. The complex is one of the biggest refineries in the United States.

Firstly, there were no fatalities in the incident, and two of the four contract workers that made it into the hospital were released after treatment. Two more remain in the hospital in stable condition, the company said in a statement.

Moreover, according to Reuters, the cause of the fire is not yet clear, however, it started in a hydrotreater unit at the refinery that had been shut on Wednesday due to a bypass line leak.

The injured were contractors who had been repairing the leak, people familiar with plant operations told Reuters. Furthermore, the blaze started around 1:00 am and ended seven hours later.

On the other hand, hydrotreaters are devices that remove sulfur and other contaminants in producing diesel, gasoline, and jet fuel. An Exxon official told a news conference that the fire had affected a unit that produces gasoline.

Also recommended for you: Data Center market in the US to reach 101 billion by 2027; Arizton. Click here to read.

Exxon’s rates at the refinery would be stable

In addition, Harris County Sheriff Ed Gonzalez said on Twitter initial reports had indicated that there had been some type of explosion at the plant. Social media users said on Twitter that a blast shook buildings in the area.

The Baytown refinery also houses a chemical plant, an olefins plant; and the country’s fourth-biggest oil refinery, with the capacity to process 560,500 barrels per day of crude. It is unclear whether any units will go out for an extended length of time.

However, Exxon is adjusting production rates at other Baytown processing units to focus on stabilizing the affected units, spokeswoman Julie King said.

Finally, the facility spans about 3,400 acres along the Houston Ship Channel, about 25 miles (40 km) east of Houston, and employs about 7,000 people. The company set up a line to report damages.

U.S. Consortium may take over the Wylfa nuclear plant project

Total acquires Fonroche Biogaz on its quest to...