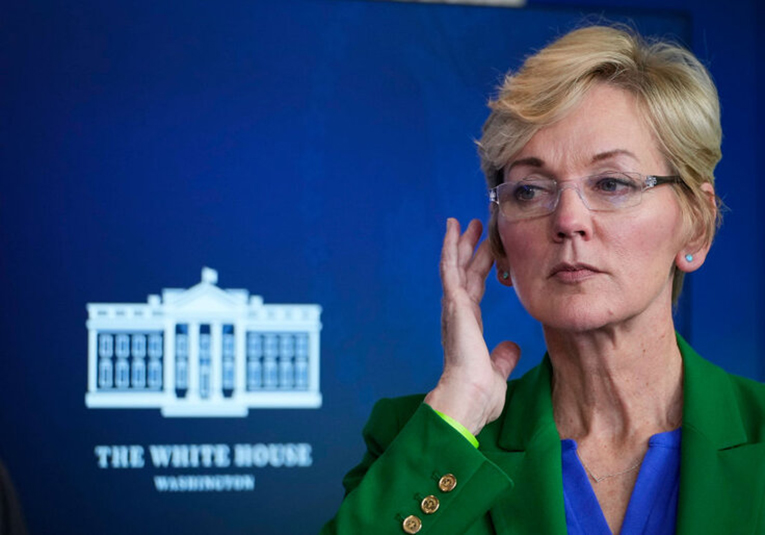 Today, U.S. Energy Secretary Jennifer Granholm made her first trip to Texas and her first trip out of Washington.  Therefore, in her visit, the Secretary toured a hydrogen plant in La Porte Friday morning.

Read more of our news content, here; How Would a Net-Zero America Look Like by 2050? Much More is Needed – Princeton University

Despite the rainy environment, which led more than a dozen workers at Air Liquide and Energy Department to share space under three black umbrellas due to a downpour, Granholm’s enthusiasm did not dampen, reported Shelby Webb with The Houston Chronicle.

Accordingly, the Secretary commented; “The bottom line is I want people to see the future of energy here in Texas. That’s why I’m here.”

Secretary Granholm on Texas Potential in the Energy Transition

In fact, the Secretary’s visit to Texas comes as the Biden Administration makes a final push to reach an agreement with Republican lawmakers on a massive $1.7 trillion infrastructure bill. If approved, this bill would pump billions into clean-energy projects and initiatives.

Besides, Biden’s plan includes $174 billion for electric vehicle charging stations and tax incentives for electric vehicle buyers. Also, a $100 billion update to the country’s electrical grid and $35 billion in research and development for energy technology and carbon capture projects.

While there is still some reluctance regarding the proposal’s affordability between Republicans and Democrats, Granholm said in her visit that the transition toward renewable energy and cleaner energy sources is already underway in Texas.

In fact, the state leads the nation in wind-generated power and is number two in solar-energy production, the Secretary noted.

Worth noting, Granholm met with Houston Mayor Sylvester Turner and members of the local congressional delegation. She also met with Representatives Lizzie Fletcher, Shelia Jackson Lee, Sylvia Garcia, and Al Green, all Democrats. Accordingly, they participated in a roundtable with energy industry officials and academics to discuss Houston’s role in the energy transition.

As part of his participation, Mayor Turner said it’s not just the economy that makes him want the city to lead in developing and deploying emerging renewable and clean-energy technologies. In fact, the region’s frequent environmental disasters are a vivid symptom of climate change. Therefore, slowing that change will be essential to the city’s survival, the Mayor pointed out.

In fact, “we have to do things differently. So, we are committed to making that happen.” Turner said. Hence, “the energy transition is one of the ways to make our city and the world better.”

Indeed, Houston is home to 48 plants that extract hydrogen from natural gas and accounts for more than one-third of the hydrogen produced in the U.S. (Prescient & Strategic Intelligence, 2021).

Even though refineries and industrial plants are the most conventional hydrogen users, Granholm said its potential as a fuel source for commercial vehicles could be a boom for the city and state.

Granholm is not the only one who thinks this way. In fact, many experts view hydrogen, which is traditionally made from natural gas, as a top prospect for oil and gas companies. Particularly those that are seeking new lines of business as fossil fuel consumption declines.

“A lot of people may not understand how hydrogen is a huge opportunity for us. Also, how people can have great jobs and careers in hydrogen,” she said.

In this sense, Granholm pointed to Air Liquide’s average salary of $62,000 a year to sign that clean energy jobs can offer very well-paid salaries. Worth noting, she said the Biden Administration is not seeking an end to oil-and-gas employment, like a binary relationship.

“What we want to do is expand the pie,” Granholm said. So, “there are all kinds of jobs for all kinds of people in all pockets of the country for our energy future.”

How Would a Net-Zero America Look Like by 2050? Much More is Needed – Princeton University