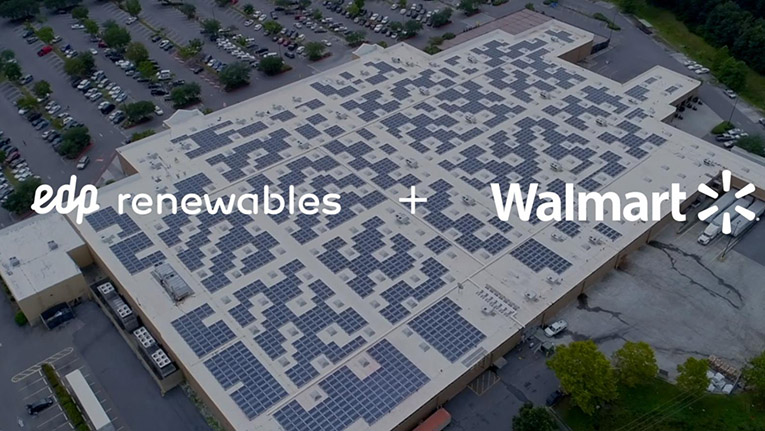 EDPR’s subsidiary EDPR North America was the company that signed the contracts with Walmart. The projects are distributed across seven states, from Arizona, California, and Illinois to New Jersey, Louisiana, Maryland, and South Carolina.

The projects contracted and installed to date vary in range and sizes; they go from rooftop to ground-mount projects. However, they generate a total of 38.3 MW of energy which is equivalent to offsetting 27.1 metric tons of carbon dioxide; or 9.2 tons of waste recycled instead of landfilled, according to the U.S. EPA’s Greenhouse Gas Equivalencies Calculator.

Moreover, the projects leverage top-notch developments for environmental protection and restoration. For example, EDPR worked with Walmart to develop a solar facility with a pollinator to restore biodiversity.

The project is part of Walmart’s commitment to restore the lands in which it operates. The solar project is mounted on the ground at Walmart’s Laurens, SC distribution Center. It features a pollinator mix that restores regional biodiversity.

This effort is also the largest from a U.S. grocery retailer to date in the matter. It aims to reduce several pollinator threats through the promotion of integrated pest management (IPM) practices; and to improve and expand pollinator habitats. The project also reduces the stormwater impact, attracts more beneficial pollinators, and enhances the visual appeal of the array.

Finally, according to the company’s statement, developments of EDPR for Walmart have been recognized a genuinely innovative. In fact, in 2019, EDPR North America’s New Jersey portfolio, comprised of five solar installations for Walmart, won the Large-Scale Project of the Year award from Solar Builder Magazine.

Transmission Developers, selected by N.Y to be part...

NTE Energy plans to build up US renewable...