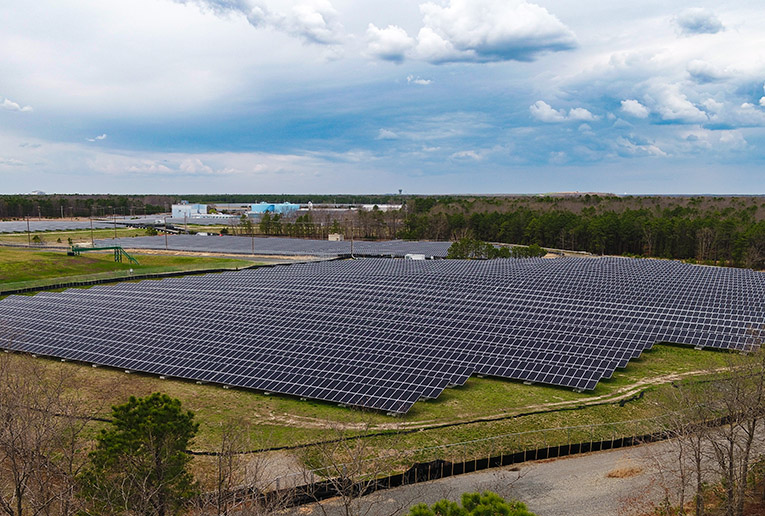 The largest solar energy project in New Jersey has begun operations by the powers of EDF Renewables and Goldman Sachs Asset Management. Both companies announced the begging of the operational phase of the Toms River Solar project this Wednesday.

Secondly, it is indeed a top-notch technology project; its solar arrays use a pre-cast ballasted system on approximately 120 acres of the BASF site. It also includes a 27.4 MW grid-connected; and an adjacent 1.5 MW net-metered solar systems.

Thirdly, overall, the project will generate enough clean energy to meet the needs of 5,250 New Jersey homes; such output would be the equivalent to avoiding more than 30,000 metric tons of CO2 each year; which in turn equates to the greenhouse gas emissions associated with driving 6,400 cars for one year.

Also recommended for you: Shale production of Chesapeake Energy to be certified by ESG criteria. Click here to read.

In addition, and in order to achieve that goal, existing paved areas in the footprint of the project were removed; and will be replaced with native meadow mix grasses and wildflowers. Additionally, Rutgers University will conduct a 5-year monitoring program to study the ecological uplift of the project.

On the other hand, about the relevance of the project, Tom Leyden, Senior Director, EDF Renewables Distributed Solutions, said. “We were pleased to work with a full set of project partners including local subcontractors; also, local and state officials, community groups, the New Jersey Board of Public Utilities; as well as professionals at Weston Solutions and Giordano, Halloran, and Ciesla.”

Finally, Michael Conti, VP within the Renewable Power business at Goldman Sachs Asset Management, commented. “It has been a pleasure to work with the EDFR team to make this project, the largest operating solar project in New Jersey, a success. We look forward to future collaboration between our organizations as well as a great future relationship with BASF.”

Decarbonization may face hurdles if tech does not...