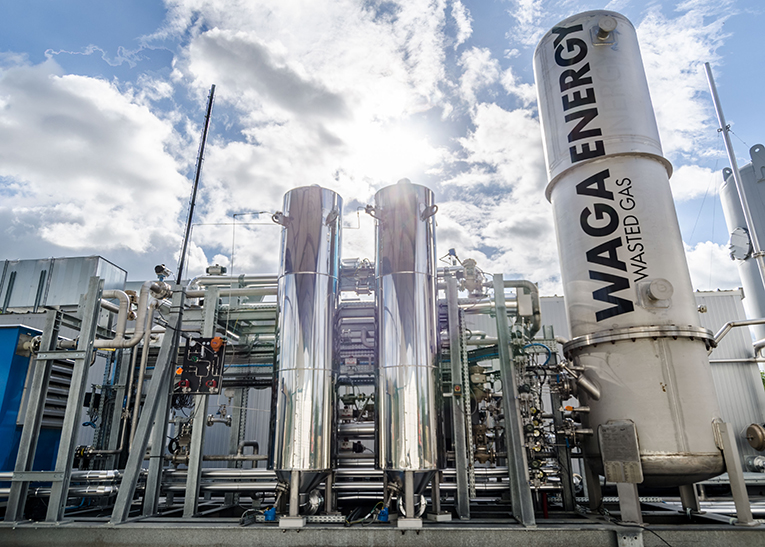 The Canadian subsidiary of the French company, Waga Energy, a leader in the recovery and transformation of landfill gas, announced today it has secured a contract with the Brome-Missisquoi Intermunicipal Waste Management Board (RIGMRBM) to produce biomethane (Renewable Natural Gas – RNG).

The agreement, which stands for a project to be developed at the Cowansville landfill site in Québec, is the second in Canada for Waga Energy. In fact, Enercycle selected the company earlier this year to equip the Saint-Étienne-des-Grès landfill with a large WAGABOX® unit (3,400 m3/h), also in Québec.

Accordingly, Waga Energy noted in a media release that it is accelerating the deployment of its WAGABOX® solution in Canada through contracts like these.

The contract with the Intermunicipal board includes the management of residual materials in Brome- Missisquoi (RIGMRBM) to equip its Cowansville landfill. There, Waga Energy will build a WAGABOX® purification unit onsite –with commissioning at the start of 2023–  to transform the landfill gas into biomethane or renewable natural gas (RNG).

Later, the company will inject the resulting RNG directly into the gas grid of Énergir. Until now, the produced gas was flared to prevent direct emissions of methane into the atmosphere.

In this regard, David Rumbsy, Managing Director of RIGMRBM, said; “Several experts were consulted to ensure that we had the best technology for our site. After a comprehensive due diligence was carried out, our choice fell on the company that offered the best technology and, above all; had the most positive impact on the environment. “

Similarly, Mathieu Lefebvre, CEO and co-founder of Waga Energy added; “We are happy to be able to help the RIGMRBM to improve its environmental practices; particularly, through our innovative gas recovery technology.

Indeed, “this new contract in Quebec is the result of the significant work we committed over the past two years; particularly, to deploy our solution in North America and help move the energy transition forward.” continued Mr. Lefebvre. Thus, “our investor-operator model involves a long-term commitment. It also requires the establishment of local industrial capacities to build and operate our units.“

Waga Energy on the construction of the WAGABOX® unit

Worth noting, the Cowansville landfill site treats 75,000 tonnes of waste per year. In this regard, and with a design to recover 1,000 m3 /h of gas; the WAGABOX® unit will produce 30 GWh of biomethane per year. Besides, it will supply 1,750 Quebec households with renewable gas; thus avoiding the emission of 5,000 tonnes of CO2 per year.

Waga Energy also said it will finance the construction of the unit. Besides, it will finance the unit’s connection to the gas network, 5 kilometers away. Further, the Company will purchase the RNG produced onsite from RIGMRBM for 20 years. Indeed, it will operate and maintain the unit by selling the green gas to a Canadian energy company.

Moreover, according to the company, its Canadian subsidiary will build the WAGABOX® unit with the support of local subcontractors. In fact, only a cryogenic distillation module will be manufactured in France and shipped overseas.

According to Waga Energy, this project will help the Québec government increase to 10%; the share of green gas into the networks by 2030.

In fact, Waga Energy currently operates ten WAGABOX® units in France, representing 225 GWh of biomethane production capacity per year. Besides, the company is now building six new units, including high-capacity ones. Thus, the firm plans to increase production significantly over the next 18 months.

New oil and gas drilling could be hindered by the U.S. gov.: Reuters

Redflow to supply Anaergia and California with 2MWh...