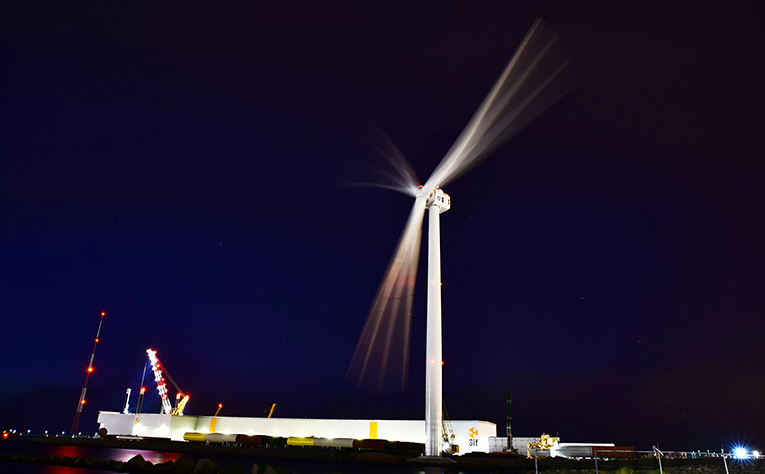 Haliade-X, the world’s most powerful wind turbine is the one to power New Jersey’s first offshore wind farm, the Ocean Wind project, developed by Orsted.

The project is currently under development about 15 miles off Atlantic City; it is expected to have an operational date in 2024. Orsted will install as much as 99 of GE-developed Haliade-X turbines above the ocean’s surface to harness with for the state.

According to GE, the Haliade-X turbines are the most powerful machines of its kind in the world. They are the most efficient wind platforms, as they possess a leading capacity factor of 60 to 64%.

“Capacity factor compares how much energy was generated against the maximum that could have been produced at continuous full power operation during a specific period of time. Each incremental point in capacity factor represents around $7 million in revenue for our customers over the life of a windfarm,” GE explains.

The turbines are 260 in height, and have a 220 meters long rotor; in capacity terms, they are up to 14 MW capacity. In annual terms, one single turbine can generate as much as 74GWh of gross annual production, which saves around 52,000 metric tons of CO2.

Recommended for you: Apex Clean Energy secures $75 M in financing from Helaba

Ocean Wind project will have a total 1,100 MW capacity, enough to power 500,000 state homes. The total capacity of the project is equal to one-seventh of the entire New Jersey’s 7,5 GW goal for renewable energy production.

Orsted, a global leader in renewable solutions, won New Jersey’s first offshore wind solicitation, which happened in June, 2019. As for now, Orsted has announced its participation for the second New Jersey bid, to develop the Ocean Wind 2 project, which would award Orsted with further 2,400 MW to Gov. Murphy’s plan.

“As New Jersey looks to rebuild its economy in the wake of COVID-19 and positions itself as a leader in the new American offshore wind industry, Ørsted is uniquely positioned to help the state achieve its goals,” said David Hardy, CEO of Ørsted Offshore North America, in regards to Ocean Wind 2 project.

Wind blades plant in Mexico from Nordex, to...