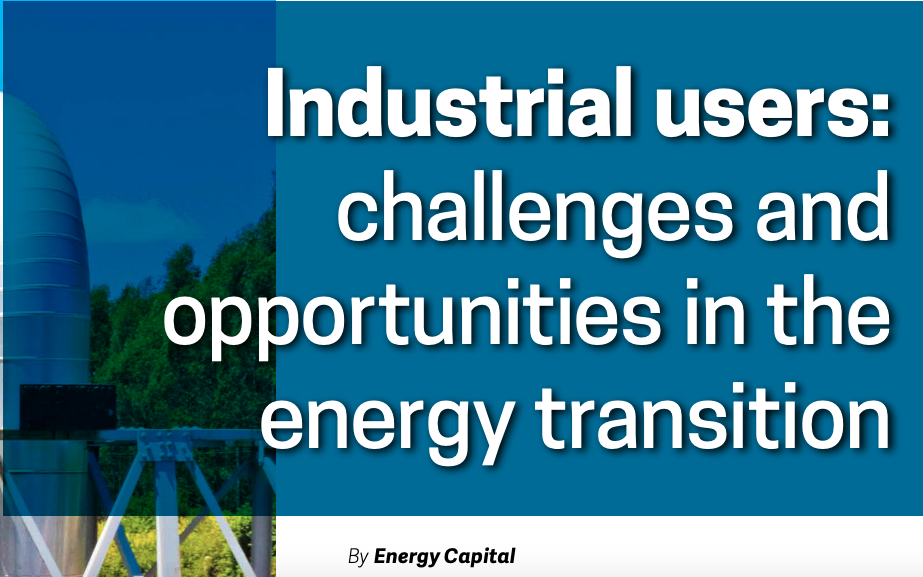 By Energy Capital. “Industrial users: challenges and opportunities in the energy transition”.

The energy transition has multiple facets. It not only involves decarbonizing electricity via wind or solar energy. Indeed, it entails efficiently operating at different industry levels, tackling challenges, and opportunities, especially in the hard to abate sectors.

We particularly refer to the heavy industry, including cement, steel, chemicals, and heavy-duty transportation. Industrial activity in these sectors is more challenging to decarbonize as it is less heavily reliant on electricity. According to Energy Transitions Commission’s “Mission Possible: Reaching Net-Zero Carbon Emissions from Harder-to-Abate Sectors by MidCentury” report. Heavy industry accounts for 10 to 16 gigatons of carbon dioxide emissions globally, and 30% of the total CO2 emissions.

Green hydrogen, biofuels, long-duration energy storage, and carbon offsets and carbon credits have risen as alternatives for making this transition. Circular economy and energy efficiency efforts have also become relevant in this context.

Across North America, hard to abate sectors face multiple challenges when adopting energy transition efforts. The first is investment, and the second one, infrastructure development at scale. The upfront costs for developing carbon capture infrastructure, installing long-duration batteries at a great scale could make a company less profitable in the short term.

That’s why the private and the public sectors, boost investment and spur infrastructure development, with less impact for the companies. An effort of this kind was announced by TotalEnergies, Air Liquide, VINCI, and a group of partners back in October. They sponsored the creation of the world’s largest fund exclusively dedicated to clean hydrogen infrastructure solutions. The fund aims to reach 1.5 billion euros to accelerate the growth of the clean hydrogen ecosystem worldwide. Especially in North America, Europe, and Asia.

Moreover, the fund has already reached 800 million euros of investment pool, intending to reach 1,5 billion. With the support of public policies and other public entities, the fund aims to support green hydrogen projects. It with a total value of about 15 billion euros. In USA, Shell is pushing the creation of a Carbon Capture and Storage (CCS) hub in Alberta. Such a hub involved the Polaris CCS project, one of Shell’s largest. It has a capacity of 300 million tons of CO2 captured over the project’s life, only on its first phase.

The project involves the creation of an industrial hub to help companies surrounding Shell’s energy and chemicals park of Scotford. When fully operational such a hub would capture more than 10 million tons of CO2 from other users each year. In June 2021, Bakken Energy and Mitsubishi Power entered into a strategic agreement. With the target to create a world-class clean hydrogen hub in North Dakota. The hub aims to develop a series of facilities to produce, store, transport, and consume clean hydrogen, particularly the blue hydrogen type.

Also, it will produce hydrogen using natural gas, capturing and storing the CO2 emissions related to its process. It would serve industries in North Dakota. However, at full development, it would be connected through a pipeline to another hub in Utah, serving a greater area. Paul Browning, CEO of Mitsubishi Power, said about it: “This is part of our strategy to bring decarbonized hydrogen throughout North America to customers in the power, transportation, and also industrial sectors.”

The challenges of energy transition

The main argument against the decarbonization of the industrial sector is money. Right now, it is too expensive for companies to invest in new manufacturing processes, the repurposing of old plants for them to run on cleaner fuels. In fact, if a company today invests in decarbonization, but its competitors do not, that company could suffer financially, as near-term ROI and rising commodity prices are adding pressure to industrial users.

In the Mission Possible report argues that companies should transfer that cost to their customers, an idea that Jens Burchardt, BCG’s global expert on climate change and co-founder of the Center for Climate Action, supports. However, the increases could be too much to bear. The study calculates the relative costs in regards to the energy transition. For cement manufacturing, such a cost could be around a 100 dollar increase per ton of cement, which would be a 100% increase.

For steel manufacturing, the cost per ton produced would be 120 dollars, a 30% increase. In the shipping industry, the cost would be around $4 million per bulk carrier voyage. However, the report also highlights that “the additional cost of decarbonized heavy industry and heavy-duty transport would only be 0.5% of global GDP by mid-century. The cost of running a net-zero-CO2-emissions economy would be well less than 1% of GDP.”

In addition to those increases, there are the commodity prices rising—particularly natural gas. In Europe, natural gas prices rose to multiyear highs in late September, threatening heavy industries in the U.K. to stop production. Norway’s Yara International said it would have to cut 40% of its European ammonia production due to the spike in prices. After that, U.S. company CF Industries said increasing costs prompted it to halt operations at two of its British plants.

As a result, British Steel, the U.K.’s second-largest steel producer, said it was maintaining normal production levels. However, the energy price made “it impossible to profitably make steel at certain times of the day.” The price spike hit profitability and the availability of certain goods, like CO2 for the Food and Beverage industry. To produce CO2 high amounts of natural gas are needed.

Consequently, meat processors, beer and drinks manufacturers in the U.K. reached out for help from the government. Companies warned that if CO2 production remained at such low levels, they would have to cut production. The British government announced a deal with CF Industries to restart CO2 production in the U.K to alleviate the shortage. However, the prices of the supply would increase sharply, Britain’s environment minister said.

In conclusion, to adopt certain technologies that would decrease the environmental footprint of heavy industries, a lot of investment is needed. Capital that is not always available for companies to inject, especially when commodities vital for their everyday production, like natural gas, are boosting prices to the moon.

Consequently, public policies, solid regulatory frameworks, and government support would be vital for the heavy industry to get near to a transitioning environment. In this regard, the Mission Possible report points out some ideas that would help achieve scale, drive down costs and increase adaption of new energies in hard to abate sectors.

Recommended for you. LNG: bridging the gap to a low-carbon reality

The opportunities of energy transition

Finally, industrial users have several opportunities out there in the market they can leverage to create growth from disruption despite the challenges ahead. Those opportunities are both in the public and the private sectors.

Experts from McKinsey point out that examples of such opportunities in the public sector include the European Union’s emission allowances (EUAs); guarantees of origin (GoOs); the adoption of first-generation biofuels known as fatty acid methyl esters (FAMEs); used cooking oils (UCOs) acting as a feedstock for second-generation biofuels; white certificates such as France’s certificats d’économies d’énergie (CEE), or the energy efficiency credits and tax waivers that operate in the U.S. for clean fuel adopters.

In this regard, the creation of renewable carbon certificates and biofuel-ticket trading desks have spurred. Particularly the oil and gas industry has developed biofuels trading desks dedicated to feedstocks such as vegetable oils and other waste oils. Consequently, there’s a new line of fuel sources and a new cleaner fuels supply chain.

This is a key opportunity for heavy industry companies to secure power purchase agreements, risk management solutions, and lower-carbon fuels supply. In fact, many utilities are rapidly expanding into this area, helped by renewable energy developers.

The adoption of energy efficiency and advanced analytics solutions can make the difference between profitability and risk of capital shortfalls. These technologies not only help to the creation of circularity within the company’s capital structure. But also, they enables the optimization of processes for better use of energy.

In fact, according to Mckinsey experts, the deployment of advanced analytics can lead to a reduction of more than 30 percent in costs. Moreover, day-to-day productivity, automated processes using advanced analytics engines can enable a 90% gain.

Leveraging the Value of Silos in the Capital Projects Industry