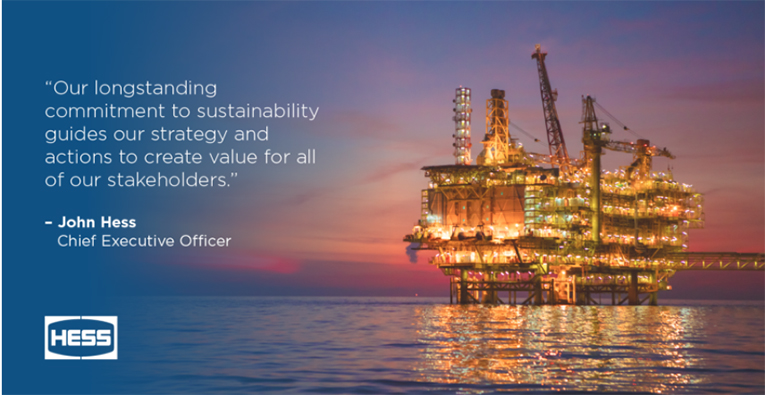 In this way, CEO John Hess said; “Our longstanding commitment to sustainability guides our strategy and actions to create value for all of our stakeholders. Therefore, our approach aligns with the world’s growing need for the affordable, reliable, and cleaner energy necessary to ensure human welfare and global economic development.“

At the same time, he continued, “We recognize that climate change is the greatest scientific challenge of the 21st century. So, we support the aim of the Paris Agreement and a global ambition to achieve net-zero emissions by 2050. Thus, we have set aggressive emission reduction targets. Besides, we are investing in technological and scientific advances designed to reduce, capture and store carbon emissions.”

Indeed, Hess Corporation’s 2020 Sustainability Report shows how the Company integrates its sustainable practices into its strategy, goals, and daily operations. For instance, highlights include reducing greenhouse gas emissions. In fact, in 2020, Hess significantly outperformed its five-year targets to reduce Scope 1 and 2 greenhouse gas (GHG) emissions intensity; particularly, by 25% and flaring intensity by 50% from its operating assets.

Similarly, Hess set five-year GHG reduction targets for 2025. Specifically, the Company pledged to reduce operated Scope 1 and 2 GHG emissions intensity by 44% and methane emissions intensity by 52% from 2017. Worth noting, these targets exceed the 22% reduction in carbon intensity by 2030 assumed in the International Energy Agency’s (IEA) Sustainable Development Scenario; which, indeed, is consistent with the Paris Agreement’s less than two °C ambition.

Accordingly, the Company also is contributing to work by the Salk Institute to develop plants with more extensive root systems; as a result, these systems will be capable of absorbing and storing potentially billions of tons of carbon per year from the atmosphere.

Another target for Hess Corporation is conducting scenario-based carbon asset risk assessments; particularly, in line with the Task Force on Climate-Related Financial Disclosures (TCFD) framework. Similarly, the Company looked to operating safely throughout the pandemic.

In 2020, Hess also reached a five-year low in its severe and significant safety incident rate; for instance, by achieving a nearly 10% reduction from 2019.

Hess Corporation also said it looked to advance diversity, equity and inclusion; and also further strengthening its longstanding commitment to diversity, equity, and inclusion in its workplace. Lastly, the Company reported it maintained top quartile ESG performance throughout 2020; thus, Hess achieved leadership status in the CDP Global Climate Analysis for the 12th consecutive year. Besides, it earned a place on the Dow Jones Sustainability Index for North America for the 11th straight year.

Transparent solar for the U.S. after Ubiquitous and Antamex agreement

Total will investment $2B in electricity and renewables...