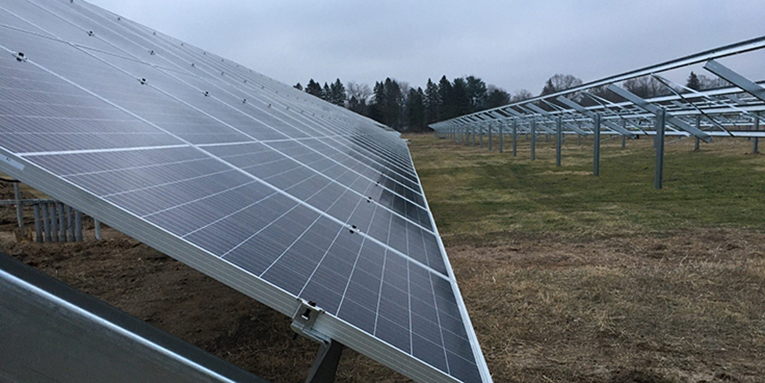 There is a new solar power plant in Michigan that Consumers Energy inaugurated this Monday; this is actually the third solar development of the company in the state. It locates in the city of Cadillac.

Firstly, the solar power development has the name of Cadillac Solar Gardens; it will generate almost half a megawatt of clean electricity. Such amount of power would be enough to electrify more than a 100 of Michigan homes at a time.

Thirdly, the inauguration follows the release by Consumers Energy of its updated Clean Energy Plan; which proposes to use nearly 8,000 megawatts of solar energy by 2040; ending the use of coal by 2025; and achieving net zero carbon emissions and saving customers $650 million through 2040.

Moreover, the Cadillac Solar Gardens locates at a reproposed site; it was a brownfield land that has a manufacturing history that dates to the late 1800s. According to the statement, the place was vacant for at least 30 years; after the closure of an auto manufacturer.

Also recommended for you: Solar development of Ameresco in Cali, awarded Top Project of the Year. Click here to read.

In addition, Consumers Energy got the land rehabilitated and installed there the solar power plant. The company also operates solar power plants at Grand Valley State University and Western Michigan University. Those two locations generate enough power to serve over 800 homes at a time.

On the other hand, those three locations are part of the Solar Gardens community solar program; which allows payments of $10 a month to support solar projects and also receive bill credits based on electricity that’s generated.

About the relevance of the project, Lauren Youngdahl Snyder, Consumers Energy’s vice president, said. “Cadillac Solar Gardens represents yet another bold step in our efforts to lead the clean energy transformation. This project will help us protect our planet; also, spur economic development in this community; and allow us to provide cleaner, also, more reliable energy across the state.”

Finally, Carla Filkins, the mayor of Cadillac, said. “Today marks a major milestone for the city of Cadillac and the entire state as we celebrate the dedication of Consumers Energy’s Cadillac Solar Gardens. The project will also play a key role in Michigan’s clean energy transformation.”

Upstream resilient: challenges and opportunities in a transitioning...