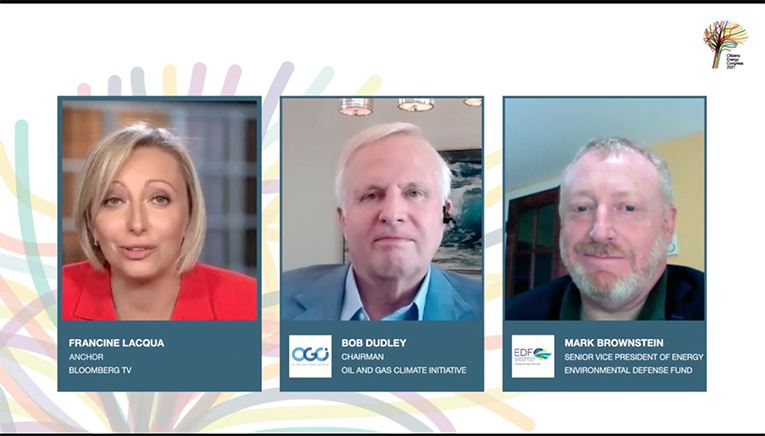 At ‘The future energy mix’ panel, part of the second day of the Citizens Energy Congress event, experts shared their insights on the promising technologies/solutions/policies that could help the world reach its climate goals; particularly, considering that several lead agencies expect that by 2050, the world will still require hydrocarbons in 50% within the global energy mix.

Read more of our news content, here; What can oil majors do to make the energy transition a reality?

Accordingly, Bob Dudley, Chairman of the Oil and Gas Climate Initiative, and Mark Brownstein, Senior Vice President of Energy with the Environmental Defense Fund, discussed the role oil and gas companies could play to support a sustainable energy transition. They also talked abouthow the industry is currently reducing its emissions. Lastly, they covered the potential role of carbon pricing, the introduction of CCUS technologies within oil and gas, and carbon abatement policies.

The role of oil and gas in the energy transition

To start, Mr. Dudley noted that “oil and gas companies can and will play an important role in the energy transition and the future energy mix.” Moreover, “if we want to have a sustainable energy transition, we’ll need oil and gas at the table; there is no question,” he continued.

On how the industry can act towards this net-zero future, the OGCI CEO mentioned it could start working on reducing its own emissions and by supporting other sectors such as steel, aluminum, and others. Also, by continuing exporting the world’s energy needs at the same time.

Worth noting, Mr. Dudley recognized that transitions are really hard, and the one towards net-zero won’t be an exemption. Thus, it will require a lot of change, new technologies that the industry hasn’t already invented, new policies, and government support.

In this regard, Mr. Brownstein commented that even though this transition will be very hard, it is also necessary. Indeed, “we’re not on track right now, in terms of technology deployment, capital outlay, and shifting policy,” he said. However, “ultimately, what civil society is looking for, and increasingly what investors are looking for, is real evidence that we’re doing this transition. So, it goes beyond investments and commitments.”

The net-zero scenario by 2050 – a better energy mix

Regarding the pace and speed at which this transition can evolve, Brownstein continued saying that currently, for instance, E&P is not as profitable as it was before. Therefore, shareholders and investors are starting to ask themselves whether they should continue with business-as-usual while investing in these activities.

Moreover, clearly, there is an environmental imperative behind this transition, and communities are being more vocal about this.

Mr. Dudley, also former group chief executive of bp, mentioned that the industry is getting the idea that the energy industry needs to transition; for instance, by ceasing more E&P investments or acquiring new energy efficiency technologies, among other solutions.

With respect to the fears that the energy mix of the future will make us all go into ‘the dark,’ Mr. Brownstein noted that “a cleaner low carbon future is going to be a better future. We’re transitioning to fundamentally better technologies than the ones we had in the past.”

However, the timeline puts a lot of pressure since if most of the world and the energy industry aim to become net-zero by 2050, we may be faced with some behavioral and consuming limits. Nonetheless, this is still fundamental, EDF Senior VP continued. Therefore, even though the International Energy Agency’s net-zero scenario requires a lot, it is still fundamentally doable within the time framework and today’s solutions.

On the contrary, Mr. Dudley said he is unsure how the industry will get to the proposed IEA’s net-zero scenario under the timeline. Particularly since today, the industry produces about a hundred million oil barrels a day, and global demand is expected to decrease 30% by 2030.

Under these circumstances, the oil and gas industry can do so much more. For instance, one fundamental way is to invest more in monitoring and detecting gas or methane leakages, said Mr. Dudley. Another is limiting emissions throughout all oil and gas operations/value chains (refining, ships, pipelines, transportation).

How important is the price? For all the energy mix

Unless something has a price on it, it doesn’t change people’s behavior. Today, we’re operating a carbon market in Europe that’s starting to perform pretty well now. But people don’t think about the cost of using carbon.

Lastly, what could be a silver bullet for the future, is green hydrogen, which doesn’t have a damaging carbon footprint; and which, along with other clean energy alternatives such as CCUS and permanent sequestration of CO2 from cement; for instance, can considerably help the energy mix throughout its transition pathway.

Solar pipeline in Spain from Lightsource bp expanded to 3GW

Wind energy for Saskatchewan by RES and Cowessess First Nation