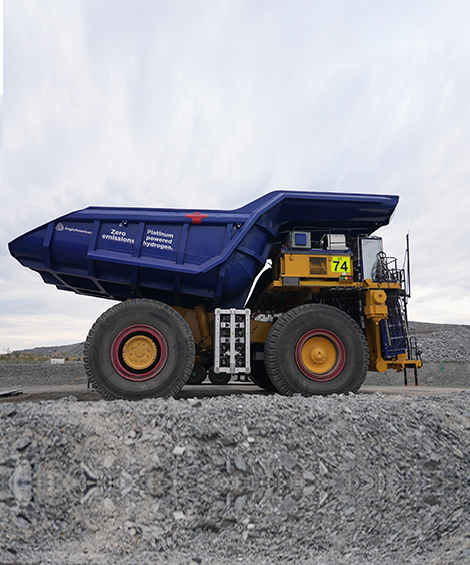 Secondly, this is part of a project to make eight of its mines in South Africa carbon neutral by 2030.

Through this initiative, it will replace a fleet of 40 diesel haulers, which use about 1 million liters of fuel in a year.

The truck uses a hybrid system with a 2 MW hydrogen battery. It generates more power than the diesel one and can carry a payload of 290 tons.

In addition, nuGen™ provides a fully integrated green hydrogen system. This consists of the production, fueling, and transportation system, producing green hydrogen at the mine.

Also, the system is part of FutureSmart Mining™, which is Anglo American’s innovation-based approach to sustainable mining.

The approach brings together technology and digitalization to drive sustainability outcomes. It thus highlights the commitment to carbon neutrality across the miner’s operations by 2040.

We recommend you read: Geothermal energy in Mexico, a potential source.

nuGen™ is a tangible demonstration of the FutureSmart Mining™ program. It is changing the future of the mining industry.

Also, the diesel emissions from the haul truck fleet account for 10-15% of total Scope 1 emissions.

Therefore, it is a big step on Anglo Americans’ path to carbon-neutral operations by 2040.

The mining industry plays a considerable role in decarbonizing the world, both through our own emissions footprint and the metals and minerals we produce that are fundamental to low-carbon energy and transportation systems.

We recommend: Oil States International, Inc. reported a net loss of $9.4 million for the 1Q 2022

Anglo American is gearing its policies toward championing the hydrogen economy. The company accepts the importance of its role in the shift to greener energy and cleaner transport.

Besides, the hydrogen economy offers the opportunity to create new engines of economic activity.

With abundant renewable energy sources and as the world’s largest producer of PGMs, hydrogen is a strategic priority for South Africa and presents a significant opportunity for economic development.

Finally, a hydrogen economy also motivates the creation of new jobs, develops the PGM sector, and contributes to decarbonization goals.

In South Africa, the Department of Science and Innovation (DSI), and the South African National Development Institute (SANEDI), in collaboration with Anglo American, Bambili Energy, and ENGIE, are exploring the possibilities of creating a Hydrogen Valley.

Also, this region will extend approximately 835 kilometers. It stretches from the Bushveld geological area, rich in platinum group metals, to Johannesburg and the south coast at Durban.

Chernobyl nuclear plant, a strategic location in the...