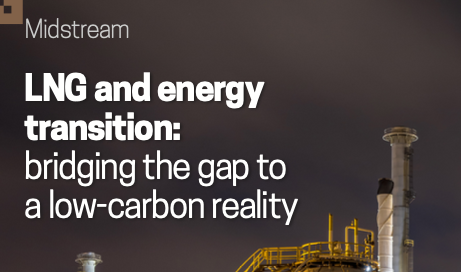 Similar stories have unfolded from the Caribbean to Southeast Asia, demonstrating how liquefied natural gas (LNG) plays a pivotal role in replacing more pollutant sources of energy with cleaner natural gas. As countries around the world set bold CO2 reduction targets, LNG today has demonstrated to be a go-to opportunity for ensuring a cleaner and more affordable energy supply.

Indeed, natural gas is often mentioned as a ‘bridge’ fuel in the context of the energy transition, as it represents a cleaner alternative compared to other fossil-fuel sources such as coal and oil.

The use of natural gas in thermal power generation has played a key role in making energy matrixes less carbon-intense as it replaces coal- and diesel-fired turbines. CO2 emissions from natural gas combustion are approximately 40% lower than that of coal and 20% lower than oil combustion emissions.

While natural gas combustion yields significant amounts of nitrogen oxides (with gas being responsible for 10% of global NOx emissions), its sulfur dioxides and fine particular matter emissions are considerably lower compared to coal and oil products. Natural gas, when used in conjunction with steam turbines in a combined cycle setup, also allows more efficiency for power generation and contributes to energy security by providing baseload capacity.

Moreover, the role of natural gas as an energy transition fuel is further evidenced when considering the challenges of rapidly scaling up renewable sources of power.

Bridging the gap to decarbonization

In the context of LNG-driven energy transition, China stands out as a major player. The country is set to overtake Japan to become the largest LNG importer in 2021, supported by growing electricity consumption. China has pursued a policy of displacing coal-fired power generation with gas-fired power plants, encouraging domestic gas consumption, and boosting the construction of LNG import infrastructure.

There are significant LNG stories beyond China. In Brazil, as droughts impact the output of numerous hydropower plants in the country, gas-fired power plants linked to LNG regasification terminals are playing an essential role in ensuring energy security by providing baseload generation capacity. Meanwhile, in Thailand, the country has recently announced it will scrap plans to build 3GW of coal-fired power capacity in favor of two 700MW gas-fired plants fed by LNG imports.

Looking beyond power generation, LNG has a major role to play in decarbonizing the marine fuels segment while green hydrogen scales up. LNG is also an attractive alternative to oil products for road transport vehicles due to lower CO2 emissions.

An array of LNG projects has been announced or are currently under development across the globe. EIC- DataStream, the EIC’s global projects tracking database, currently monitors 296 liquefaction and regasification projects worldwide, requiring a combined investment of US$825bn.

The US market leads in terms of LNG- related capital expenditure projects, capturing close to US$250bn of the global investment with a planned addition of 377mtpa of liquefaction capacity by the end of the decade. Highlights include the US$24.7bn Driftwood LNG project in Louisiana as well as Sempra’s US$10bn Port Arthur LNG terminal in Texas. A final investment decision (FID) for the two projects is expected to be announced in 2022.

Looking at the regasification segment, Asian countries present a robust pipeline of onshore LNG receiving terminals as well as FSRU projects. Vietnam is a notable example, with 11 such projects totaling an investment of US$24.7bn. As previously noted, China is another key LNG regasification market, with a US$12.7bn project pipeline.

Energy analysts agree that natural gas demand will remain resilient in the short to medium term, with LNG playing a key role when it comes to supporting decarbonization strategies across the world. However, as a number of countries push forward with their energy transition plans and net-zero targets, LNG shipments with a lower carbon footprint will be better positioned in key demand centers.

Indeed, LNG exporters able to cut emissions from natural gas exploration and production, processing, and transport are poised to gain advantage vis-à-vis more carbon-intense competitors. Carbon-neutral LNG cargoes are already a reality: since 2019 there have been approximately 15 such shipments, with key players such as Shell, Total, and Gazprom leading the way.

In summary, LNG is a key pillar for energy transition and, alongside renewables, will continue to be a critical alternative in the coming years for countries moving to a more secure, affordable, and sustainable energy matrix.