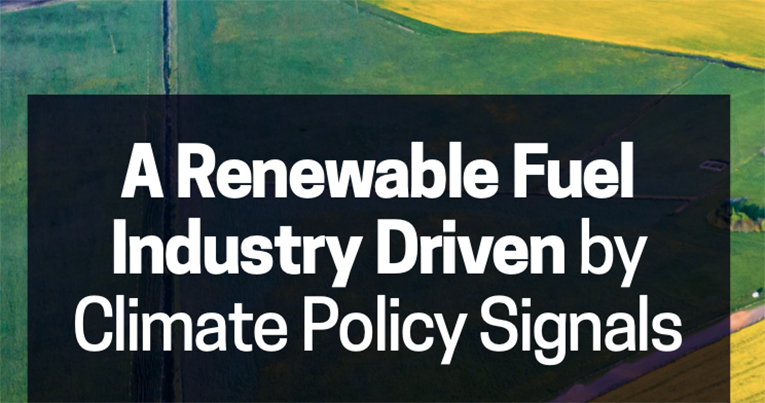 Indeed, the global energy economy is in the process of undergoing the largest shift since fossil fuels first became widely available. Thus, Canada is no exception to this transition, and neither is North America as a whole.

In fact, recent efforts in Canada to lower transportation sector greenhouse gas emissions have generated excitement and anticipation from local companies like ours; particularly, looking to be a part of a rapidly growing low-carbon and renewable fuels industry.

But let’s face it – when it comes to low carbon fuels like renewable diesel, we are almost entirely reliant on policy enabling investments. For instance, the Canadian government has a price on carbon that will increase to $170/tonne in 2030; while the proposed Clean Fuel Regulations, currently published as a draft, is projected to see carbon credits trading at $215/tonne by the same year (note: currency is in Canadian dollars). Similarly, high blends of renewable diesel are exempt from the carbon tax, and credits from the CFR can be stacked on top of this savings.

In other words, by 2030 a 100% renewable diesel blend would have a carbon policy advantage of approximately $2.50-$3.00/ gallon (carbon price savings + credits from the CFR) compared to straight diesel fuel. Hence, this is key to ensuring that low-carbon fuels become ubiquitous across Canada.

It is also why Covenant Energy has undertaken important discussions with the government, such as presenting to a House of Commons committee; to convey to Members of Parliament from all political parties that policy is central to driving our project forward.

Thus, coming from a fifth-generation canola farming family with over 13,000 acres of production, I have been able to see first- hand how the markets and supply chains have evolved. Besides, I believe that the time is now for Canada to lead in this industry.

In the United States, we see leading programs such as the California Low Carbon Fuel Standard that bring consistent investment in new projects. Also, a flourishing renewable fuels economy. Therefore, supporting renewable fuel production in Canada is something that should be done. Besides, it will bring benefits across both local and national economies as well as the environment.

Other Renewable Fuel Challenges in Canada

Canada also must ensure that our regulatory requirements align with our American neighbors; so that a strong domestic market is created. In fact, if the domestic market is weak, there will be no reason to build new facilities in Canada; thus, leading to loss of job opportunities and economic growth; particularly when investors know that the market signals in the United States are clear. This would be a huge lost opportunity, particularly in light of the economic troubles that the COVID-19 pandemic has created.

For instance, Canada’s renewed climate partnership with the United States that aims to accelerate ambitions was met with enthusiasm; mainly, as it further serves to align North American interests, coordinate respective programs, and strengthen regional support.

The Canadian industry is also showing great interest in both arctic-grade renewable diesel and sustainable aviation fuel; particularly, as projects must meet the current and future needs of the transportation sector and for remote power generation. For instance, there are unique fuel requirements in Canada’s northern and remote communities where temperatures can drop to -40 degrees Fahrenheit. Hence, Covenant Energy will be able to produce renewable diesel that meets these requirements.

The aviation sector is also in the midst of moving towards decarbonization; so it will be an important part of the renewable fuel economy very soon. As we have seen with pilot projects and procurement investments made by the United States government; Canada’s government has followed suit and committed to developing low-emission marine and aviation fuels for its fleet. With this in mind, Covenant Energy’s facility will have the capacity to produce both arctic-grade renewable diesel and sustainable aviation fuel.

Finally, Canada’s policy commitments have shown that to achieve a transition to a low-carbon future; the government must take leadership in creating the desired environment; particularly, for good quality, long-term investment. Also, the increased use of low-carbon fuels will be essential to meeting Canada’s climate targets. Moreover, this outlook is reflected in the demand for renewable diesel and biofuels. Equally, these policy measures will be essential to ensuring the success of projects like Covenant Energy’s. Also, to lead to a healthy renewable fuels economy.