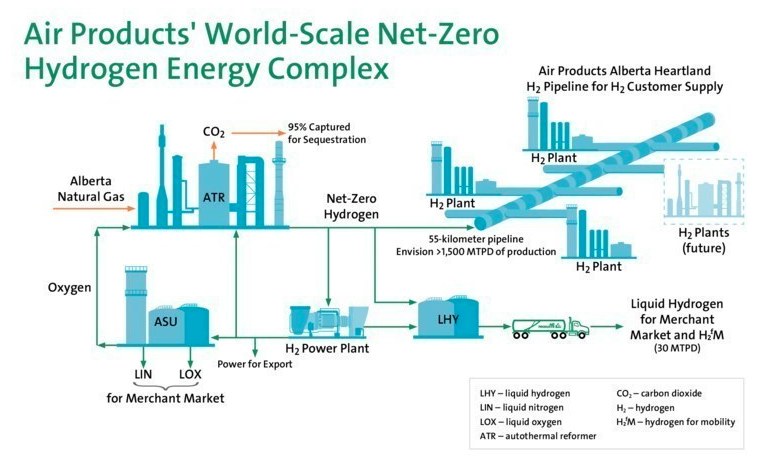 Today, hydrogen production Company Air Products, and its subsidiary Air Products Canada, with the Government of Canada and the Province of Alberta, announced a multi-billion-dollar plan. Particularly, this deal will serve to build a world-class new net-zero hydrogen energy complex.

According to the company, this project, once completed, will make Edmonton, Alberta, the center of western Canada’s hydrogen economy. Besides, it will set the stage for Air Products to operate the most competitive and lowest-carbon-intensity hydrogen network globally.

Indeed, Canada is currently undergoing a clean energy diversification strategy. Accordingly, the country’s administration is constantly adjusting its regulatory framework; thus, making clear that hydrogen will be a crucial enabler for carbon neutrality by 2050.

Worth noting, Air Products began work in 2018 on the core of this world-scale energy complex in Edmonton. In 2024, the company expects to start onstream with a transformative $1.3 billion (CAD) net-zero hydrogen production and liquefaction facility.

The Air Products’ Board of Directors approved this project, still subject to the completion of the agreements.

Thus, the project relies on well-established technologies to jump-start an ambitious transition to carbon neutrality. Besides, it will take advantage of Canada’s abundant and low-cost natural resources, extensive infrastructure, and highly skilled workforce.

According to Air Product, another key feature of Canada is an innovative spirit, which will be a model for other jurisdictions around the globe.

Therefore, Air Products will deploy advanced hydrogen technology and innovative design to deliver net-zero emissions. Additionally, the new facility will capture over 95% of the carbon dioxide (CO2) from the feedstock natural gas.

Later, the facility will store it safely back underground. Accordingly, hydrogen-fueled electricity will offset the remaining five percent of emissions.

Benefits for the Transportation Sector

According to the project’s developers, the complex will help refining and petrochemical customers served by the company’s Heartland Hydrogen Pipeline; mainly, to reduce their carbon intensity.

The complex also marks a first in the broader use of hydrogen in Alberta, enabling the production of liquid hydrogen to be an emissions-free fuel in the transportation sector and to generate clean electricity. This is expected to have a positive impact in lowering Alberta’s carbon emissions.

In this way, Air Products’ hydrogen business in Alberta is envisioned to reach over 1,500 tonnes of hydrogen production per day. Besides, it could achieve greater than three million tonnes per year of CO2 capture.

Initially, Air Products will build, own, and operate a new net-zero hydrogen complex