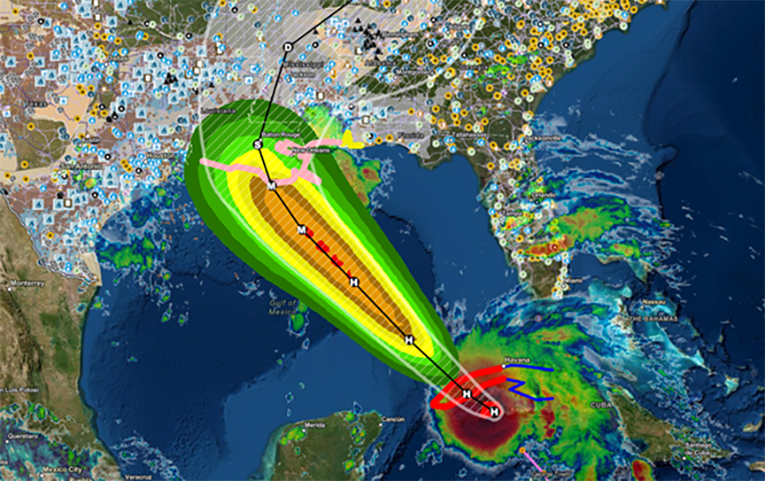 Hurricane Ida is approaching the U.S. Gulf Coast; it is expected to hit land by August 29. As the region is home to key energy infrastructure for the U.S., the Energy Information Administration warned that the event could be particularly disruptive for local energy supply and demand; particularly on the end of fuel transportation and electricity.

On the EIA’s Energy Disruptions Map, the agency shows storm-related geographic data from the National Hurricane Center; as well as the National Weather Service. There the agency draws how much of the energy infrastructure in the region could be affected by Hurricane Ida.

According to the report, on Ida’s way there are high voltage electricity transmission lines; also, power plants and petroleum bulk terminals. As reported by the EIA, the demand for fuel transportation increases rapidly during the days and hours just before the storm’s arrival.

Such rapid and unexpected peak on demand puts pressure on local inventories as the rest of the supply chain has no time to respond; consequently, Louisiana has already declared state of emergency ahead of the hurricane’s arrival.

As we reported previously, the storm initiated on the Caribbean Sea, and increased rapidly in intensity to reach the category of major hurricane. Just as oil companies with offshore operations in the Gulf of Mexico knew about the storm, they proceeded to evacuate the personnel.

Since Thursday, companies like Chevron, Shell and bp began evacuating by helicopter and other transports all the non-essential personnel from offshore platforms; they also began shutting down operations.

Moreover, as Hurricane Ida poses serious threat to companies, by this Friday afternoon, oil companies had stopped more than 1,6 million barrels of oil production. The stoppage also happens on the oilfields that provide 17% of the nation’s oil production.

In fact, as Reuters reports; the production cutbacks for Hurricane Ida are already bigger than those cuts that 2005’s Hurricane Katrina pushed on the industry. According to the National Hurricane Center, it could become “an extremely dangerous major hurricane; and threaten the U.S. Gulf Coast with catastrophic wind damage.”

Finally, oil companies have already shut 59% of Gulf oil production; and 49% of natural gas output, according to the U.S. offshore regulator. Also, a total of 90 offshore facilities were evacuated and 11 drilling vessels moved out of harm’s way.