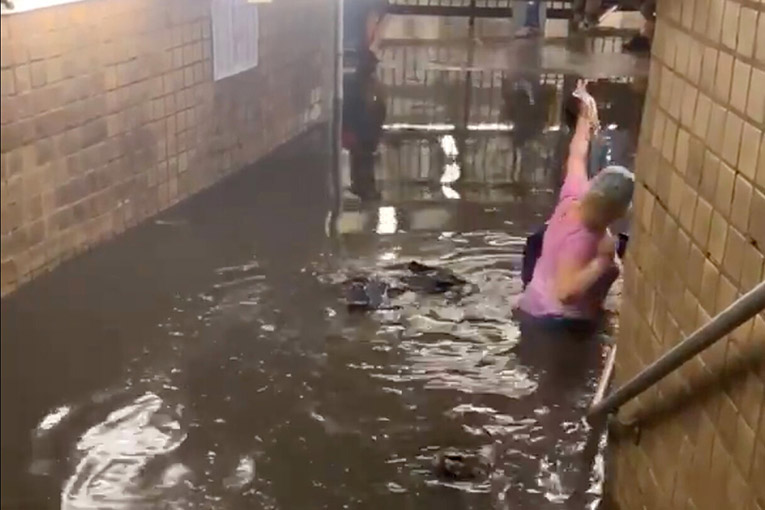 Heavy rains continue to disrupt the civilian life of New York, New Jersey and Connecticut this Friday, as Tropical storm Elsa makes its way up to the Northeast coast. According to the NYT, July 8’s night was restless as mass floods happened in those cities.

Firstly, on social media some dramatic videos emerged of a heavily flooded New York train station; as of this Friday morning heavy rains persisted in the region; and flash flood watches were in place.

Secondly, according to the National Weather Service, the storm will pass through southern New England with winds up to 50 miles per hour; prompting flood warnings until 4 p.m. for parts of Massachusetts.

Thirdly, these disruptions, however, are indeed related to climate change, as discussed by the Environmental Defense Fund on its social media. Up on Twitter, the EDF explained how these heavy rains relate to climate change; and consequently, how is vital to fight it.

Moreover, the EDF explained that, in recent decades, when it rains, it rains so much more, and with more destructive power. According to the 2017 National Climate Assessment, in the Northeastern United States, the heaviest downpours now produce 55% more rain compared to the 1950s.

Furthermore, climate change contributes to the brute force of hurricanes as in a warmer atmosphere there is more moisture. “In recent years we’ve seen devastating amounts of rain; as when 20 to 30 inches fell in the Carolinas within a 24-hour period in 2018.” Said EDF via Twitter.

Indeed the situation at New York can be related to many other factors; however, climate change is also intrinsically related to heavier and stronger rains.

On the other hand, as of July 9, at least a dozen people have been rescued from the floods; particularly in the highways, says the NYT. The people are in fact waling with waist-deep waters on their way into one Upper Manhattan station.

Finally, according to Transit officials, crews of experts are out; across all of the city to address the problems as quickly as possible.

Shell expands its position in GOM after Leopard...