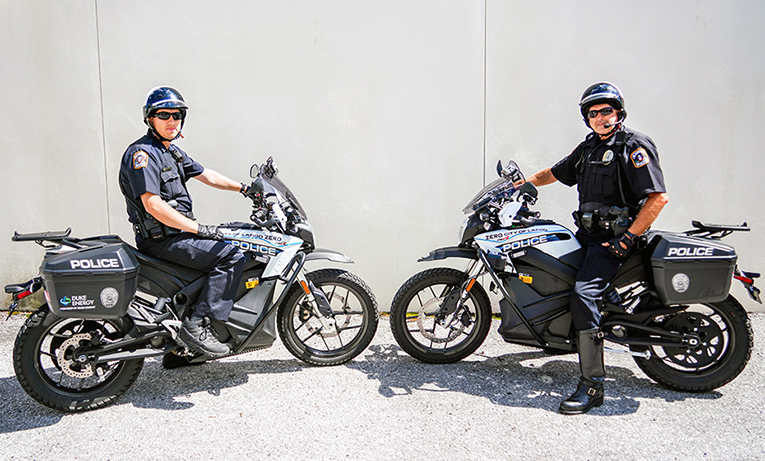 Today, the Largo Police Department in Florida announced it is getting more efficient by adding two new Zero electric motorcycles to its fleet. Indeed, this initiative is part of Largo City’s transition to all-renewable energy.

About the electric police motorcycles’ addition

In this regard, American electric power and natural gas holding Company, Duke Energy, gave a grant to help fund the motorcycle project. In this way, the Company shared a media release; it is strengthening its goal of net-zero carbon emissions by 2050.

Accordingly, the city’s commitment to a light-duty electric fleet by 2030 is part of the Largo Environmental Action Plan. Moreover, Largo plans to convert to 100% renewable energy as a government by 2035 and as a community by 2050.

In this regard, Sharon Arroyo, Duke Energy, Florida’s vice president of government and community relations, said; In fact, “when we heard that it was important to the city of Largo, that was definitely exciting for us to get behind and fund.”

Therefore, “Largo has really been stepping up and leading the way in the area of green initiatives for their community.”

In that way, “by transitioning our fleet to electric, we’re improving the air quality. Also, public health of our residents and workers,” she added. Particularly, “this is very important for our most vulnerable community members.”

According to traffic officers, the electric motorcycles are smoother, faster, and quieter. Particularly, they allow the police to patrol the parks and trails without disturbing them while not emitting exhaust.

It is worth noting that Duke Energy’s eTransEnergy subsidiary currently works with municipalities. Also, with government agencies, and others to transition to electric vehicle fleets.

Accordingly, the Company has provided almost $1 million in grants to Greensboro, Asheville, and the Triangle area of North Carolina. Particularly, to transition their municipal bus fleets to electric.

In that sense, Florida presents excellent opportunities for EV. For instance, the state is home to more than 21 million residents; also, passenger vehicles are responsible for 50% of criteria air pollutant emissions.

Invenergy announces a 1.3GW solar center, the largest in the U.S.