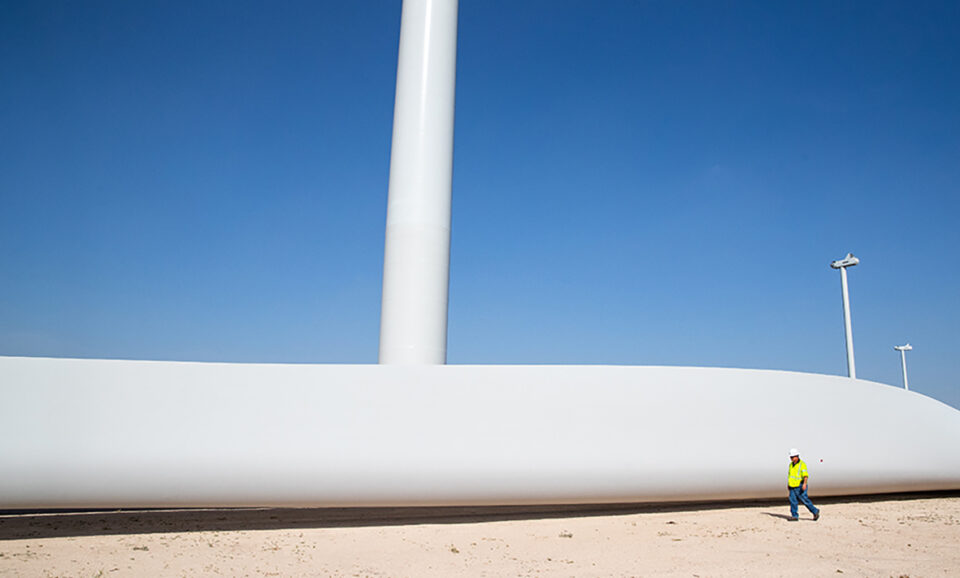 The wind turbines from Duke Energy’s Mesteño Windpower in Texas are among the nations’ tallest. In fact, they are almost as tall as the Seattle’s Space Needle; they are almost 590 feet tall.

Firstly, the Mesteño Windpower Project in Texas is in its second year of operation. Duke Energy recently released pictures of it while it was under construction. These massive machines spread across the land of Mesteño; as the project has 56 of them.

Secondly, the project locates in Starr County, Texas. In fact, is Duke Energy’s fourth project in the county and the 11th in the state of Texas; which is the leader in wind energy generation. Overall, the Mesteño project generates enough power to feed about 60,000 average homes.

Thirdly, as wind energy projects spread amongst the nation, wind turbines are getting bigger and wider; as wider blades increases the amount of energy they can harvest.

On the other hand, wind generation is the fastest growing sources of U.S. electric generation; and it will be like that for at least two more years. In fact, by 2030, renewable energy sources are projected to total 38 percent of the nation’s energy generation; rather than roughly 18 percent today, according to the Energy Information Administration.

Also recommended for you: Synthetic natural gas, the goal of an investment by Baker Hughes. Click here to read.

Consequently, Duke Energy is also boosting its wind energy generation portfolio; in fact, it plans to double it by 2025; as it moves toward a goal of net-zero carbon emissions by 2050.

Moreover, the company has more than 8,000 megawatts of wind and solar with an additional 1,300 megawatts nearing completion. Indeed, many of these projects are under construction. It largest solar project to date will be the Pisgah Ridge Solar project, located in Navarro County, Texas.

In addition, as we have reported previously, the project has begun construction; once operational, it will have 250 megawatts of capacity.

On the other hand, the company is also building a solar project for North Carolina: the Stony Knoll solar project. it will be a 22,6-megawatts solar energy plant owned and operated by Duke Energy. Once completed, it will be the largest solar plant in Surry County.

In conclusion, Duke Energy is among the strongest players in renewable energy generation in the U.S. With major renewable energy projects coming online in coming years, the company will further strength its portfolio.

Synthetic natural gas, the goal of an investment by Baker Hughes

From R&D adopters to innovators in the Oil...