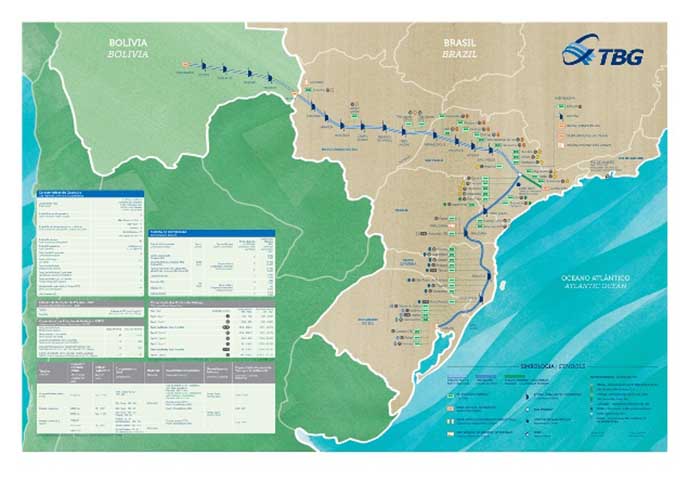 According to a Reuters report, a consortium of Canada’s Enbridge, Belgium’s Fluxys, and U.S. private equity firm EIG Global Energy Partners is planning to submit a non-binding offer for Brazil’s Petrobras largest natural gas import pipeline. Accordingly, the companies are looking forward to submitting this offer and showing its interests in the TBG and TBS Pipelines before the July 5 deadline.

In fact, Petroleo Brasileiro, or colloquially known Petrobras, put its stakes on sale in the 2,593-kilometer (1,611-mile) TBG pipeline, which imports gas from Bolivia, and the far southern TSB pipeline in December. Consequently, the company started accepting non-binding offers in late April.

Currently, the Brazilian oil and gas state-run company holds 51% of TBG and 25% of TSB. It is worth noting that Fluxys already has a minority stake in TBG, which gives it a right of first refusal in the asset.

On the other hand, TSB, formally Transportadora Sulbrasileira de Gas, is a far smaller asset (50 kilometers). Hence, TSB manages two pipelines in the Rio Grande do Sul, which borders Argentina and Uruguay.

What does this move represent for the consortium?

Near sources to the Enbridge-Fluxys-EIG consortium said Reuters it is preparing to submit a binding offer. Indeed, it was not clear if there were competing bids for the assets, Reuters noted.

In this sense, if the consortium is ultimately successful, it would mark Enbridge’s first foray into South America. Already, the Canadian company moves about 25% of crude produced in North America. Also, it has a market that covers nearly 20% of all the natural gas consumed in the United States.

As rumors sparked, Enbridge said in a statement that it does not “respond to market speculation.” Similarly, Petrobras, EIG, and Fluxys did not respond to requests for comment.

What does it mean for Petrobras?

This move would also mark a significant step forward for Petrobras in its ongoing drive to divest non-core assets. In fact, the state-run company is looking forward to reducing its debt load and sharpening its focus on deepwater oil production through this stakes’ sell.

For instance, Petrobras has already sold its stake in the TAG (90% for $8.6 billion in 2019). Also, NTS gas pipeline units to consortia led by Engie SA and Brookfield Asset Management Inc, respectively.

Compared to other countries and state-run companies in Latin America, Brazil’s Petrobras has been selling assets since 2015. Particularly, the company is in a move to bringing private-sector competition to the market.

Orsted and Eversource to establish fabrication facility at ProvPort

Sustainable lithium extraction in the eyes of the...

We Energies and WPS propose to acquire Koshkonong...